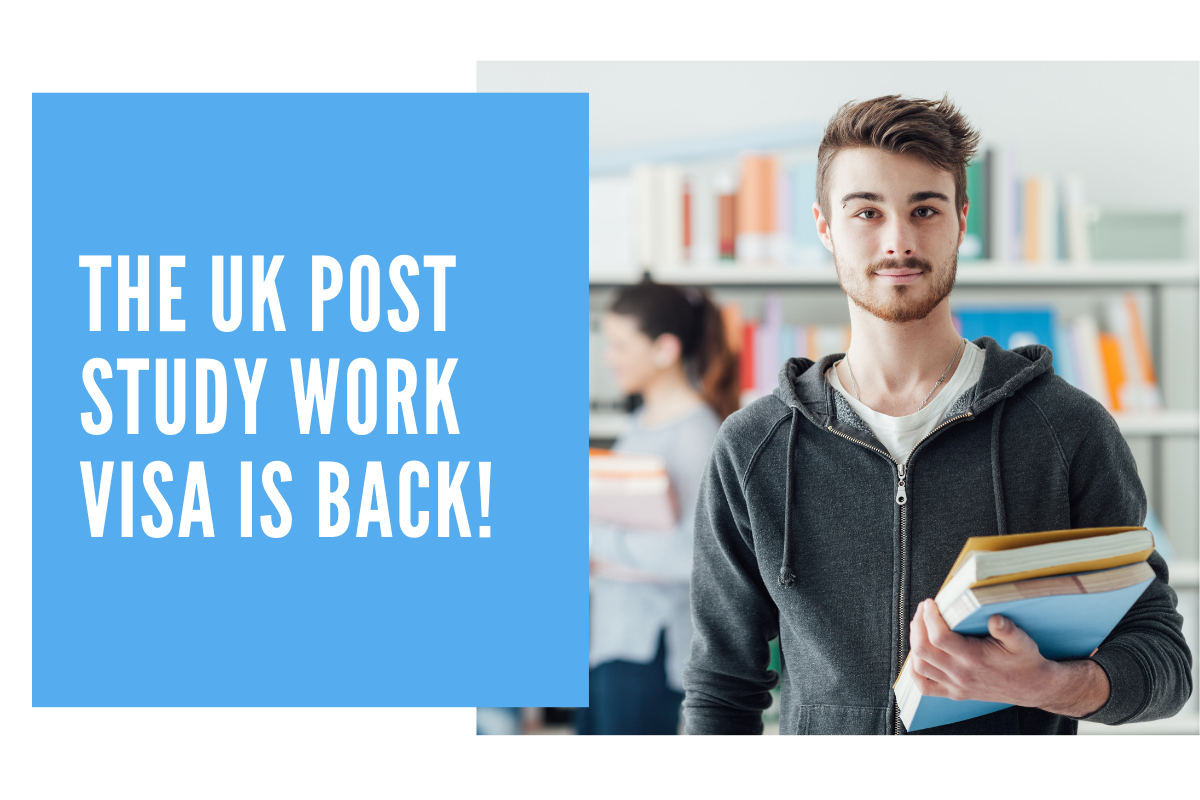 The United Kingdom is opening its doors again to students as the government plans to re-introduce the UK Post Study visa; allowing students to stay and work in the UK for 2 years after completing their study.

This was a route that was previously called Tier 1- Post-study visa which was closed in 2012 when Theresa May was the Home Secretary. This proposed reinstatement of this visa follows the announcement and plans announced in August 2019 to set up a new route for the skilled workers in STEM (which was also very similar to the earlier closed Tier 1 Highly Skilled/General Migrant routes but with better conditions overall).

“Prime Minister Boris Johnson said the change would see students “unlock their potential” and begin careers in the UK.”

Further good news is that this change will not only apply to new students applying to come to the UK but will start with current international students already studying in the United Kingdom. One of the main criteria is that they must be studying at an institution with a track record in upholding immigration checks.

The other benefits of studying in the UK (apart from being able to stay for 2 years to work) is that there is no restriction on the kinds of jobs students would have to seek and no cap on numbers.

Mark Easton, the BBC’s home editor said, “Where Theresa May introduced what she called a hostile environment around migration rules, with an ambition to reduce net migration to the tens of thousands, Boris Johnson has promised to scrap that target and encourage the “brightest and best” to come and live and work in ‘global Britain’.”

Chancellor Sajid Javid tweeted that the move was “about time”, adding that the government “should have reversed this silly policy years ago”.

We asked our head immigration consultant, Peju Ojemuyiwa, to weigh in. She says, “It is clear that the UK government has always known the significant positive economic impact these previously closed routes (Tier 1 General and Tier 1 Post Study visas) brought to the UK, but it has only taken this government under Boris Johnson to acknowledge this fact, therefore implementing changes to bring them back.

Whether these proposed changes by the Boris Johnson government are their true beliefs or just a reaction to deal with one of the risks Brexit will bring to the UK is something to consider, as to how long these routes will remain open will be determined by what the motivations are. Therefore, a quick reaction and proactive planning by anyone planning to come, stay in the UK in these categories is crucial.

However, regardless of the reason, there is real reason for the current students in the UK to take a breath of fresh air knowing that they can extend their stay under the post-study provisions (when it launches) without compulsorily requiring employment under the current Tier 2 which is currently the only main route open to them. And it is definitely a piece of great news for UK’s Higher Educational System as they can, similar to the words of Trump, “Make UK Universities attractive and great again”

More than ever, it is time for students to select UK universities as their place of choice to study and take advantage of fulfilling their goal of studying, working, living and contributing to the UK economy.

To apply for your University place and visa or to discuss and plan your relocation to the UK under these routes, please contact us or book an appointment.

New Points based system brings in changes for students

Happy ever after’s via the Fiancé Visa Route